With over 30 years combined industry experience as performers, producers and on the business side of the music industry, our team is expertly placed not only to produce top quality music, video and photography, but also to help you understand and navigate the new streaming-first landscape of music, helping to get your music out wider audiences more efficiently.

In addition, we have on site luxury accommodation enabling us to work with you outside of regular studio hours, making your time and money with us go even further. 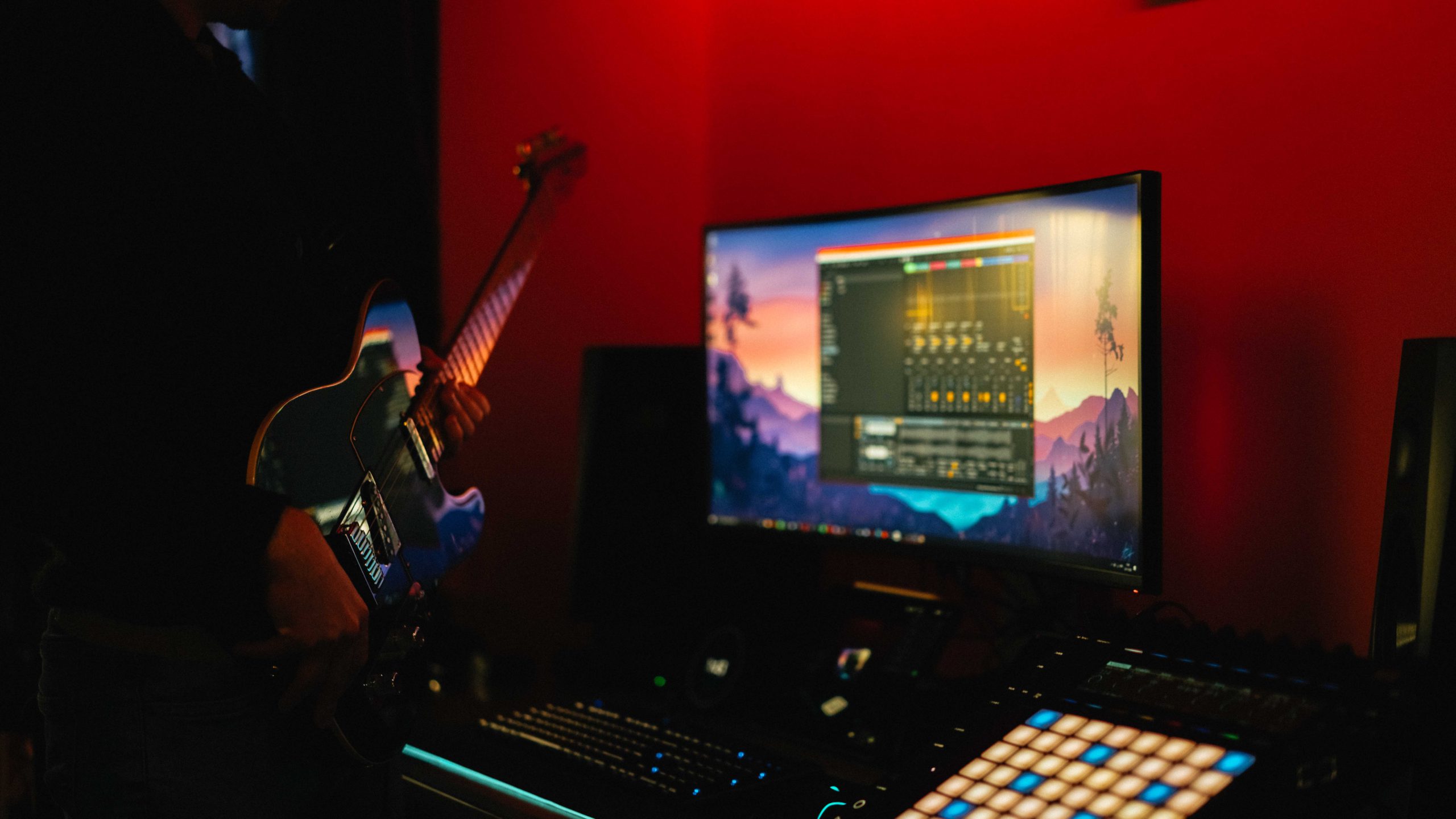 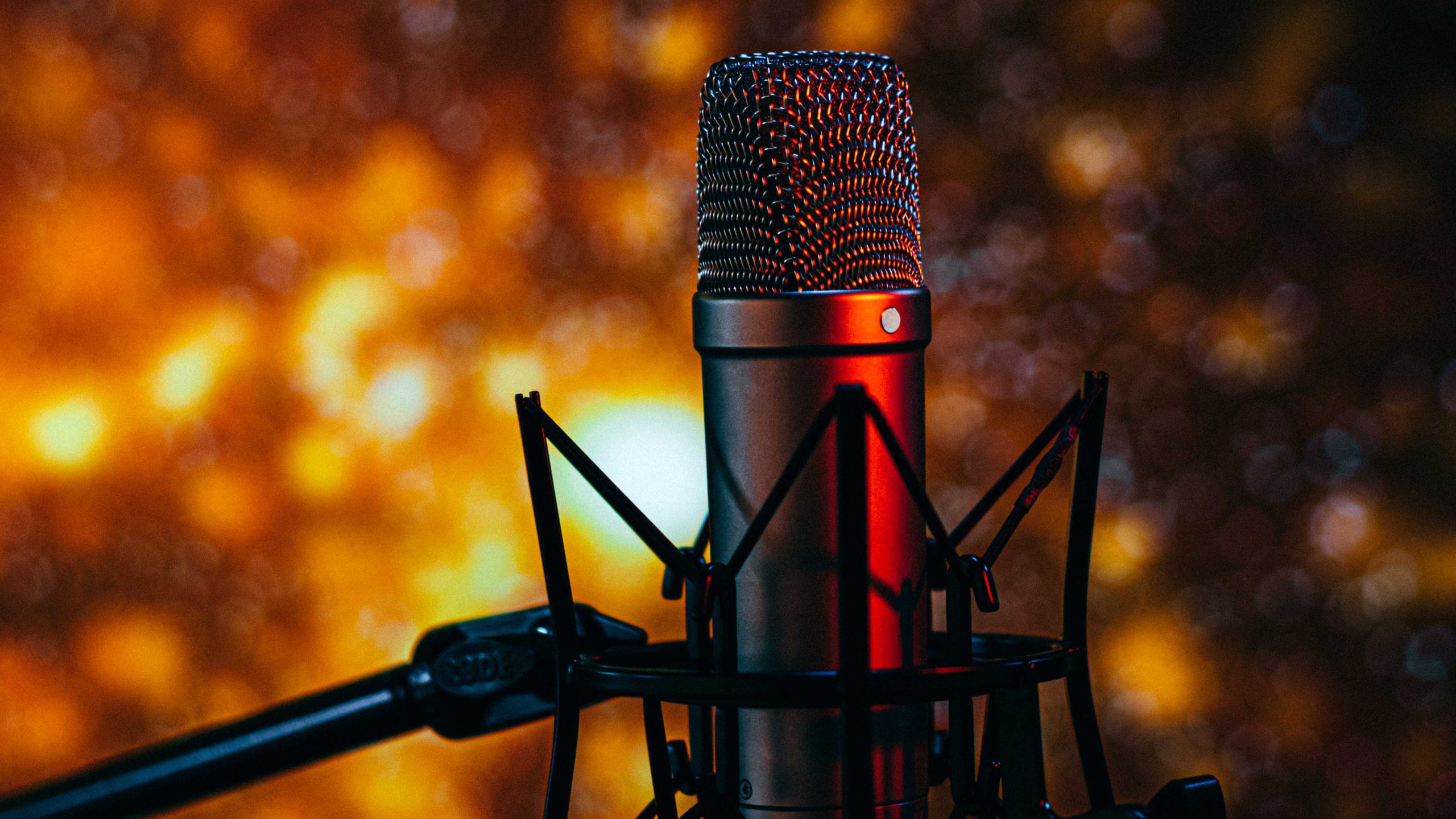 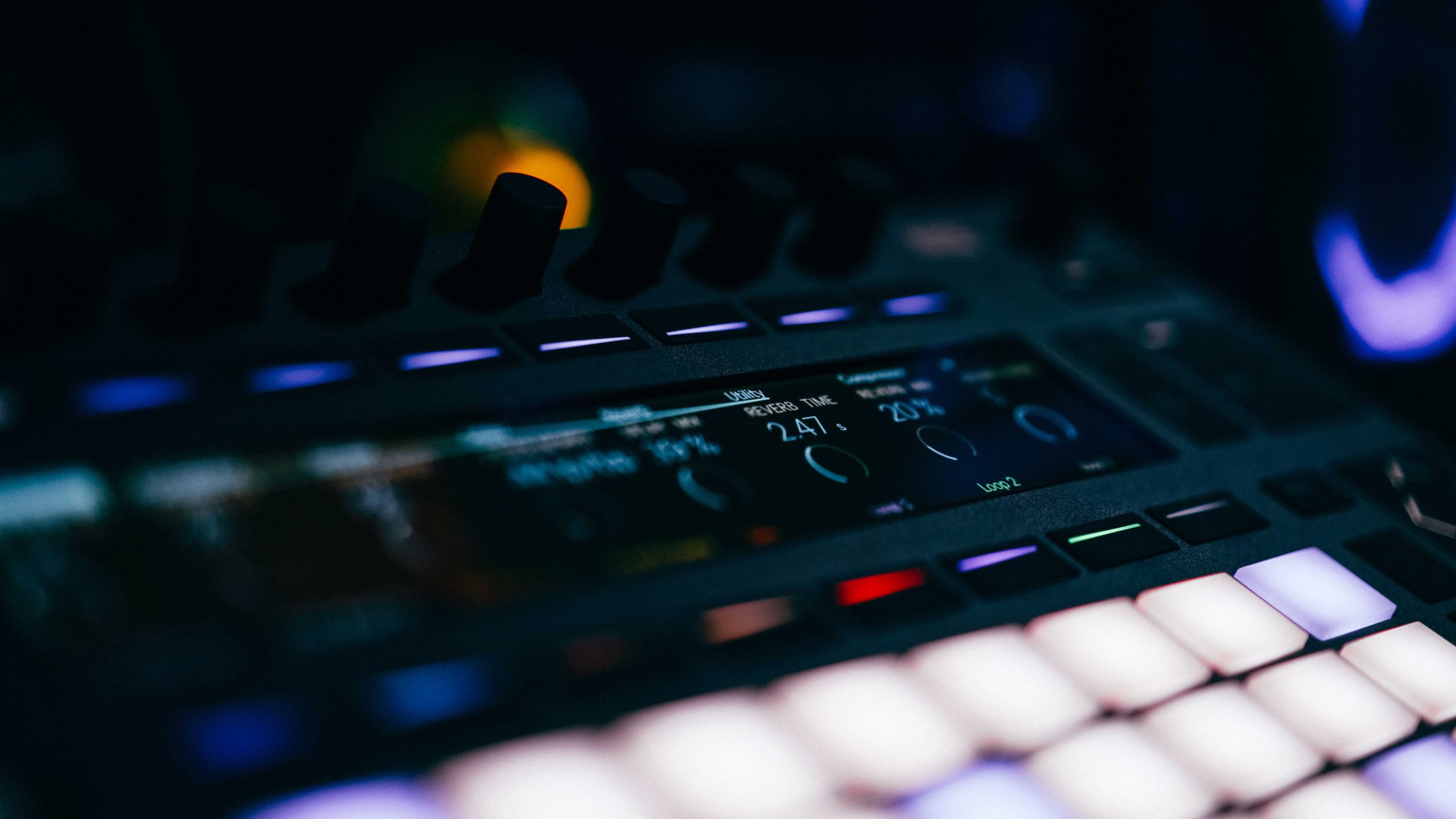 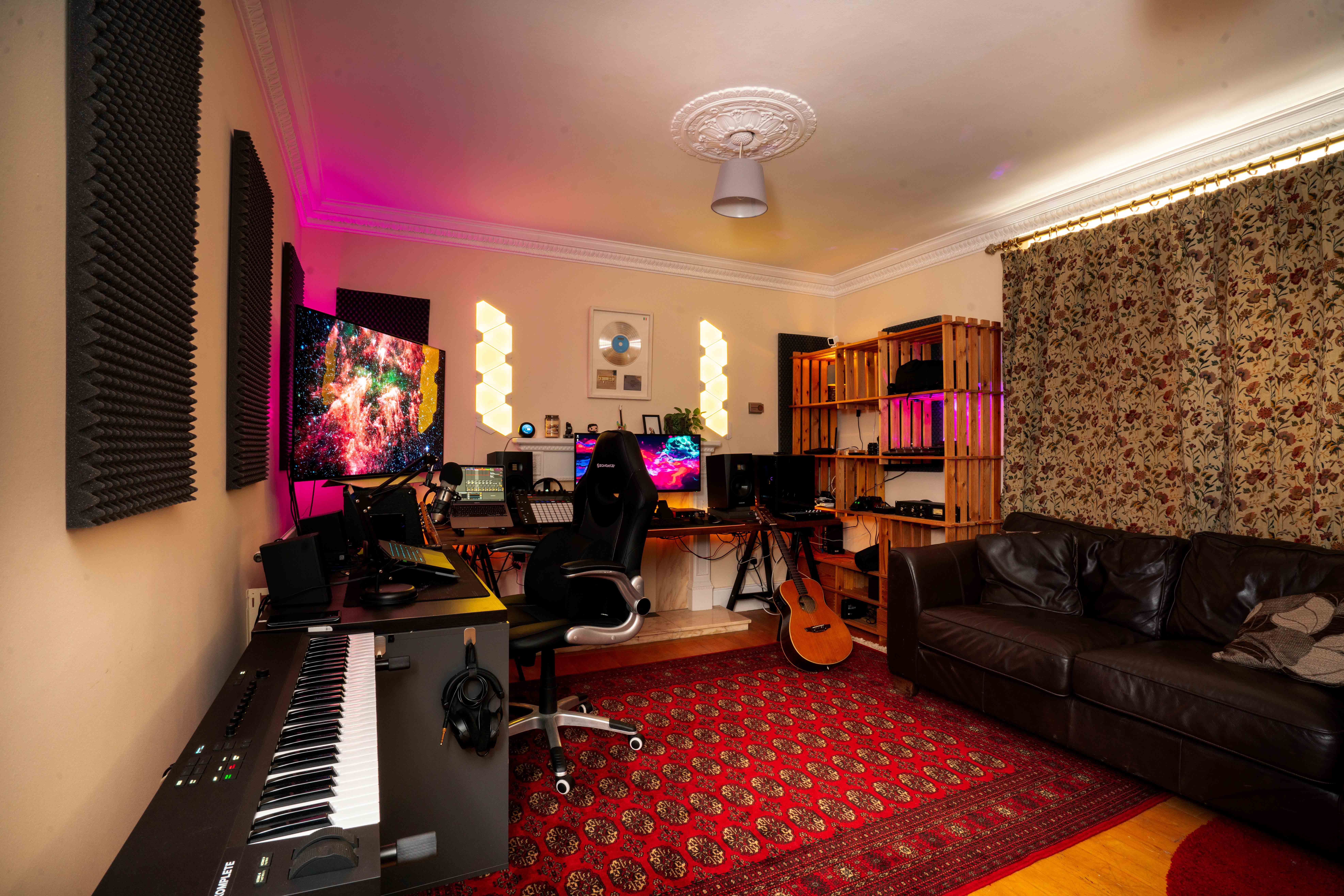 Our fully kitted out multimedia studio enables us to track, mix and master broadcast quality music, and the ambient feel of the live room gives us the means to shoot eye catching playthrough videos, giving you (the artist) professional content for your social channels to wow your fans, and show prospective agents, labels and managers that you mean business.

What’s more, with Bristol and the picturesque countryside of Avon and Somerset on our doorstep, we can easily access urban, industrial, as well as peaceful and tranquil backdrops for promo photoshoots and music videos.

Yes, that is a shed – we turned it into a vocal booth. Yes, you can do that and yes, it is awesome!

Our self-contained luxury apartment is situated above the control room and consists of a spacious double bedroom, bathroom and a study; which can be used as a pre-production or writing space. Guests also have access to our fully kitted out kitchen and living room, located below our studio control room, great for relaxing after a day’s work in the studio.

Want to make your reservation? Click here to enquire about availability. 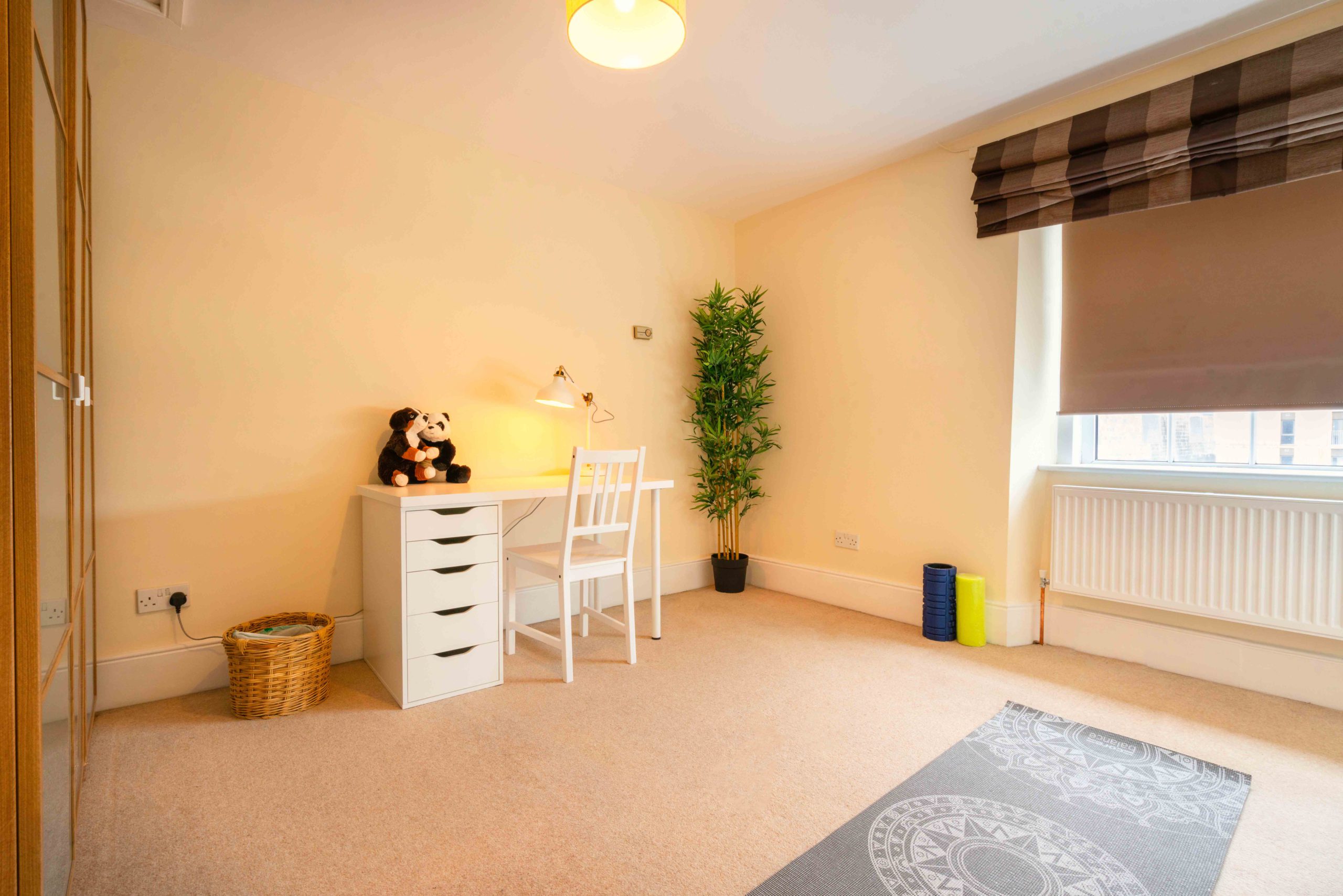 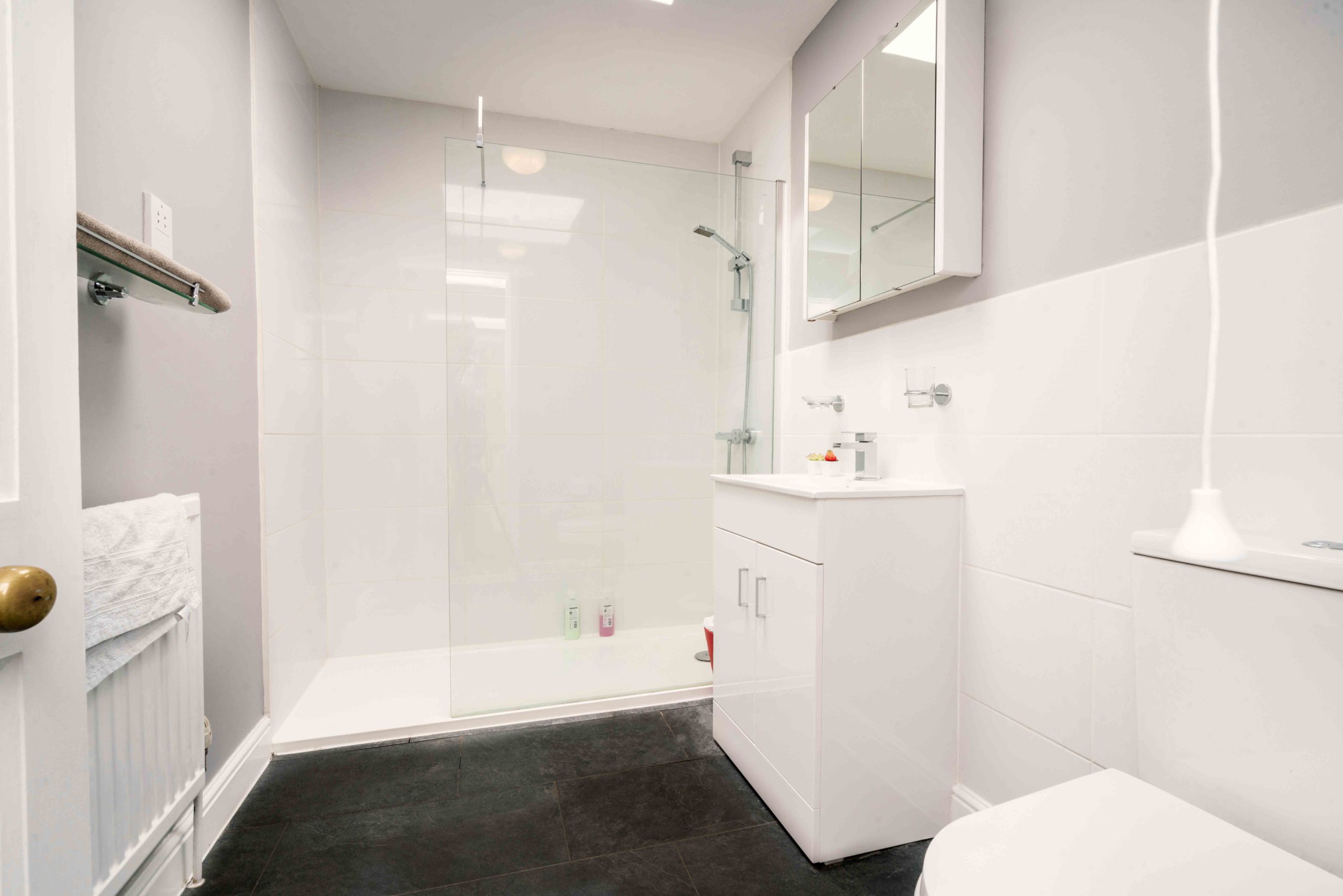 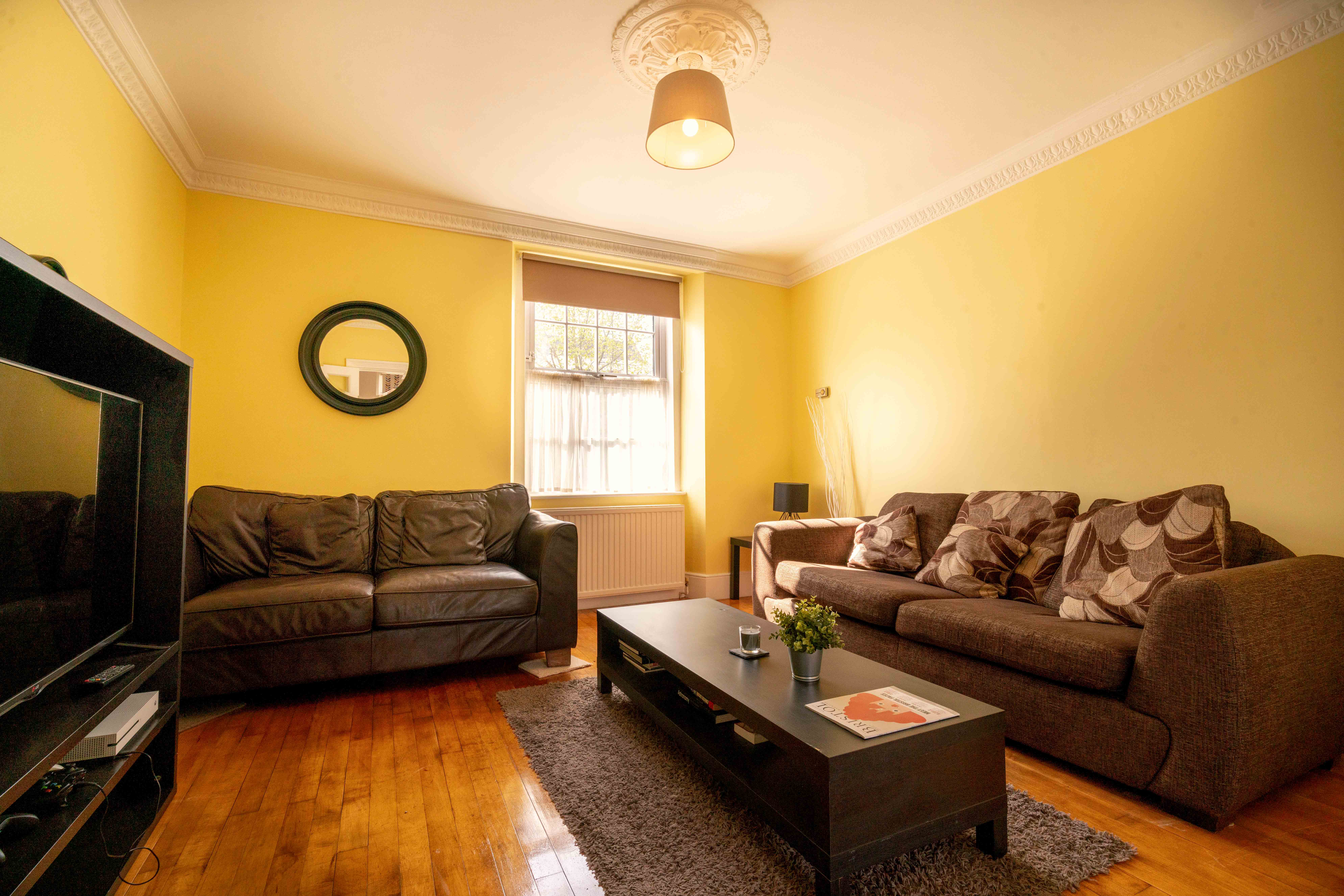 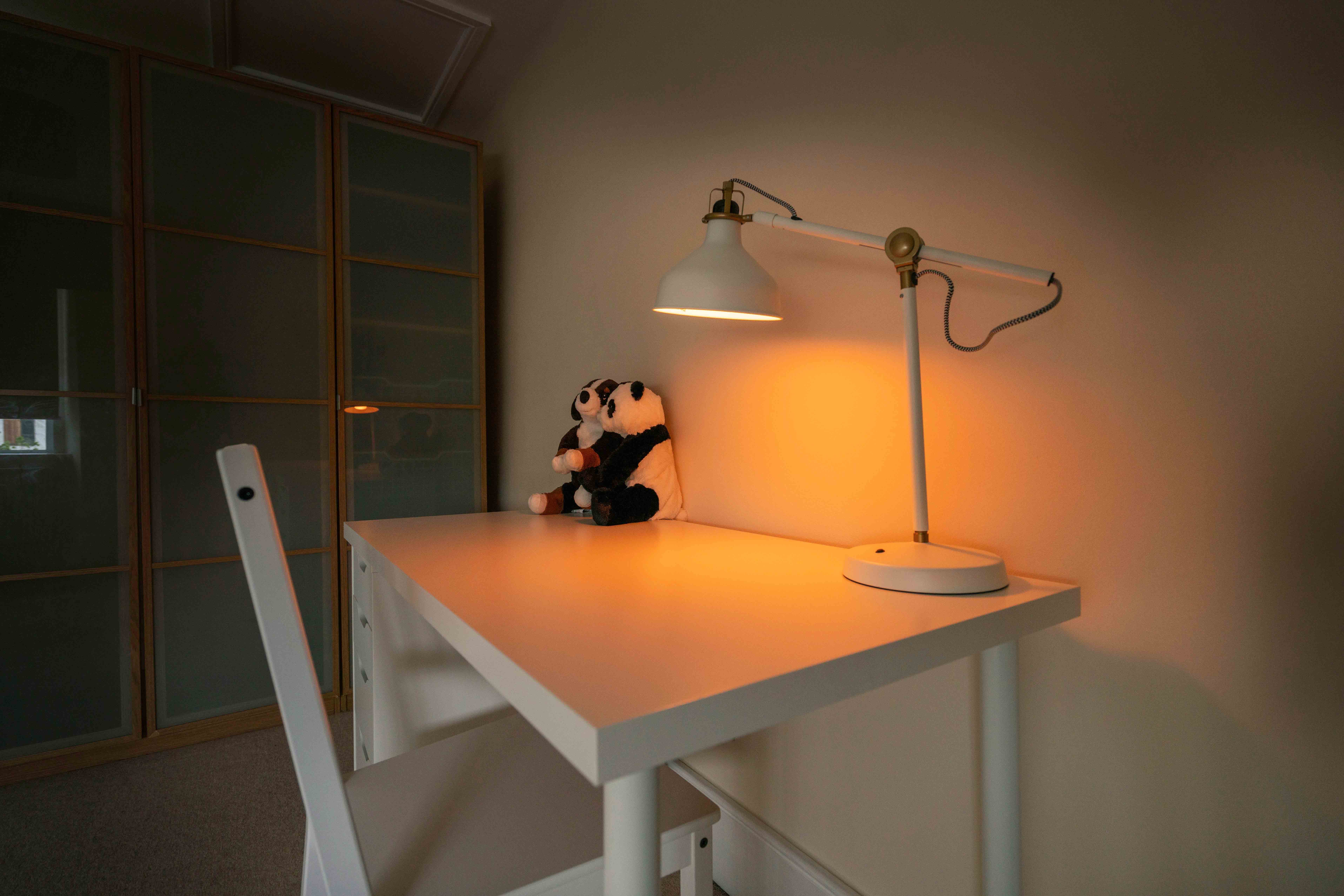 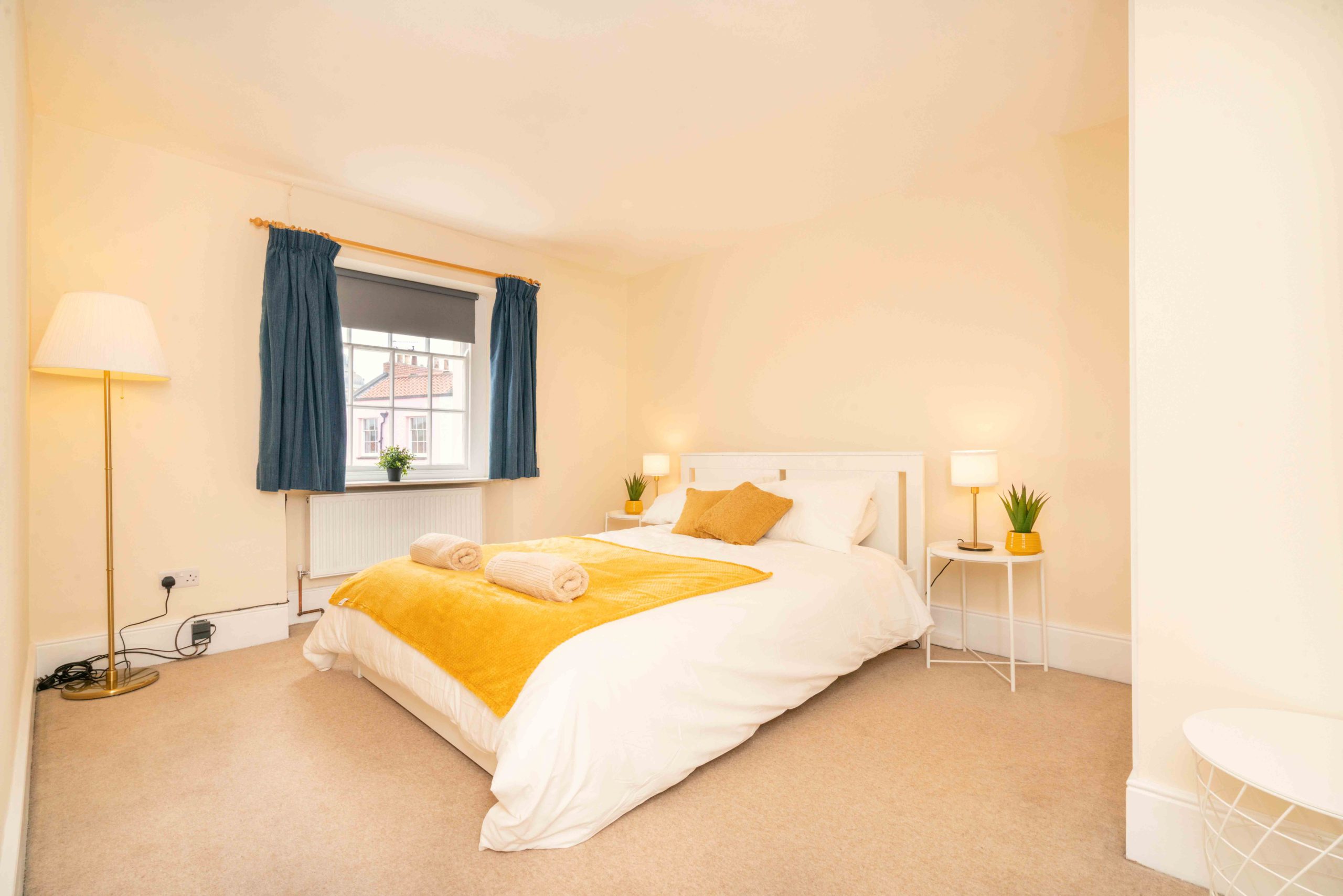 Independent artists have a real challenge on their hands when it comes to promoting a new release. You need the music, the artwork, a music video (and even a trailer/sneak peak) and promo photos. What’s more, to drive momentum, you even need playthrough videos, to drip-feed your fanbase so that they have fresh content, keeping them engaged. On top of all that, you’ve then got to put a marketing plan together to make sure everything fits correctly – all this needs to happen before you’ve even released anything.

Even if money isn’t a factor for you when it comes to getting all of that produced, often time definitely is!

And that’s part of the reason why we’ve set Avon Studios up in the way we have. Giving artists of all kinds access to a one stop shop for all of your music and promo needs, benefiting from economies of scale and speed to market.

Track in a day

One full day studio as well as accommodation usage (9am to 9pm).

As part of this package, we offer songwriting assistance, vocal and instrument tracking, as well as a basic mixdown of your track.

Have an EP of material you want to release? We can get everything you need to ensure it has the best chance of success.

+ £45 Per Night Accommodation (if required)

Already have your music recorded? No problem! We can help you take care of the rest.

+ £45 Per Night Accommodation (if required)

The ultimate studio package for artists who are serious about their music and content. This package sets you up with everything you need to keep your fans engaged over your entire release cycle. 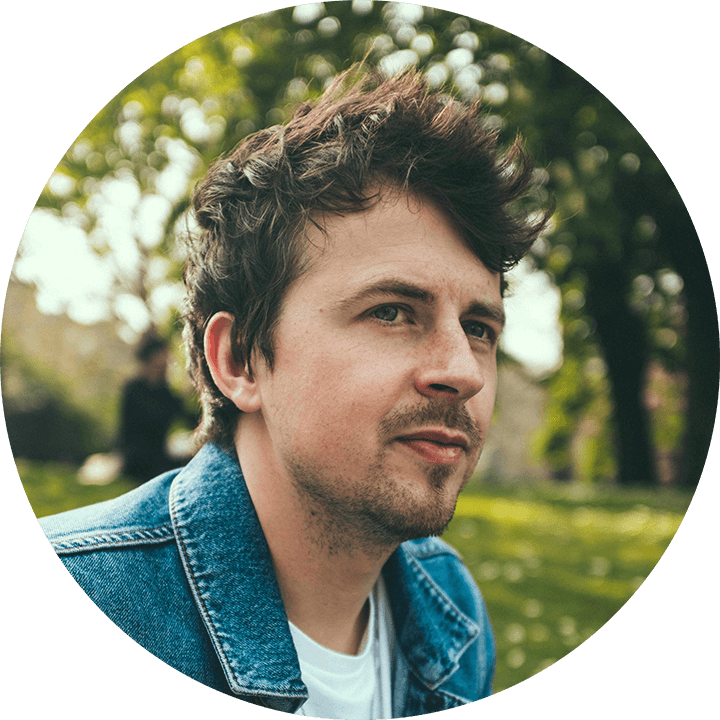 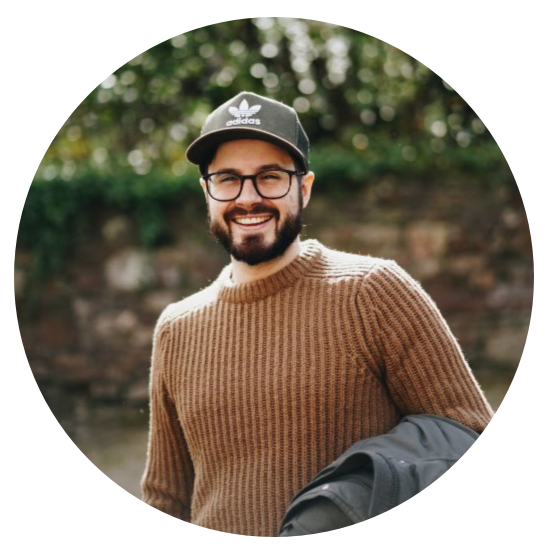 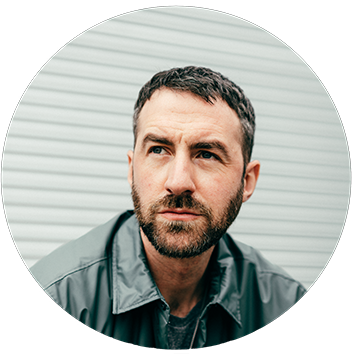 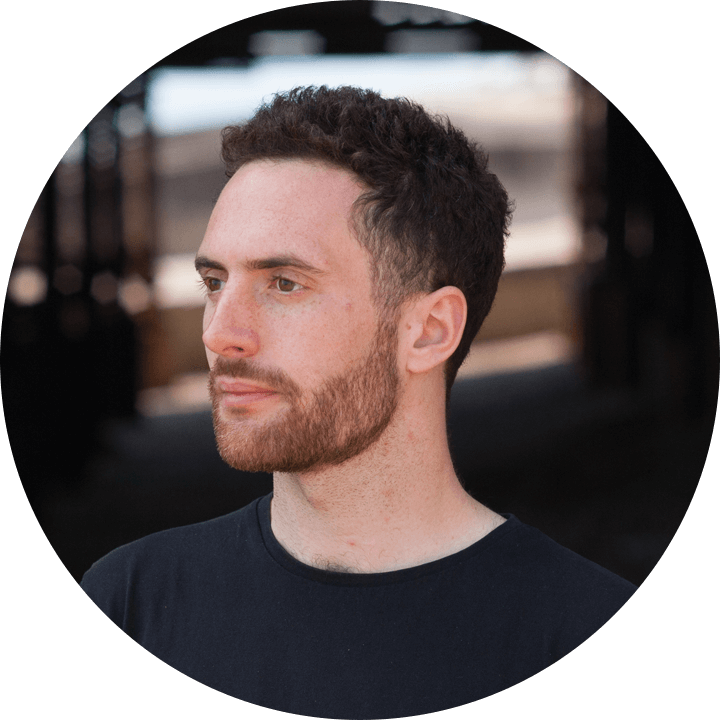 Duncan offers a bespoke consultancy service designed to empower artists. He provides this through artist / brand development, marketing support and managerial services to aid in the progression of an artist’s career as a musician and independent business owner. As well as being a passionate musician with a performance career spanning over a decade, Duncan decided to work within the industry through his twenties.

He has worked with large multinationals such as Red Light Artist Management, Universal Music, AWAL and Faber Alt Publishing, through to working with booking agencies, various marketing publications and for brands on a freelance basis. His most recent work has been with the charity ‘Youth Music’ and the digital knowledge company ‘Music Ally’ guiding young artists, as they enter a rapidly changing industry.

Dubliner Andrew Glover started his musical journey as classical pianist, going on to find his calling in the dark arts of mixing and mastering commercial modern music.

His work has achieved great success, with over 30 million streams on Spotify alone, and millions of radio plays on a host of hit songs across Europe. He has mixed 5 number one albums (4 of which have been certified Platinum), and has even written film scores for shows now airing on Netflix.

Glover has learned from and worked with some of the greatest minds in the industry including Mark Needham (The Killers, Imagine Dragons), Dan Frampton (The Script) and Matty Green (Dua Lipa, Royal Blood).

We are delighted to have Andrew on board with us here at Avon to work his magic and ensure that your recordings are primed and ready for radio airplay and editorial playlists on the world’s leading digital streaming platforms.

Richards, James Lock’s friend of 18 years and former Head of Marketing at Instrumental; the AI Music Discovery Platform responsible for 3 Consecutive Christmas No.1s, Todrick Hall’s “Quarantine Queen” and Calum Scott’s hugely successful cover of Robyn’s “Dancing On My Own” brings a different kind of industry experience to the team.

James and Mitch started their musical journey together whilst at secondary school, getting discovered by Grammy and Ivor Novello nominee Steve Duberry at just 15 years of age. Whilst their musical paths went in quite different directions, they remain close friends to this day.

Richards’ experience as an independent artist and at the cutting edge of how “the record labels of the future” will operate, puts him in the best position to help you master the digital music landscape – he can teach you about how to claim your royalties, pitch for editorial playlists across major streaming platforms and advise on how to set up your release marketing.

Multi-platinum selling artist, songwriter, professional photographer and videographer James Lock is the creative force behind Avon Studios. With a career already spanning almost 20 years, he has shared stages with the likes of Blondie, Olly Murs, 30 Seconds to Mars and Bastille (to name but a few).

Lock really found his groove with Irish folk pop giants Keywest; where over ten years he was instrumental in their evolution as an outfit of Buskers on Grafton Street into an Arena-Playing, Triple-Platinum selling sensation.

Incredibly, they did all this whilst remaining completely independent of major labels; a trend which is fast becoming the blueprint for modern, commercially astute acts the world over.

Now back in his native UK, plying his trade as a multimedia production expert, James is keen to pass on the benefits of this new way of working, helping independent artists to stay independent and make a good living from their music.